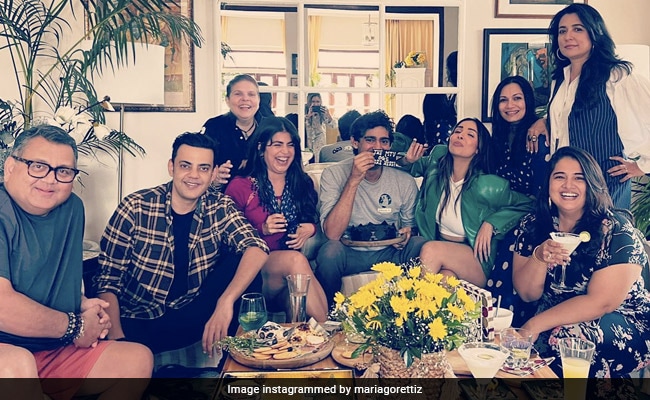 Count the VJs in this picture. (courtesy of Mariagorettiz)

Maria Goretti shared a series of pictures and videos from the MTV OGs are here reunion on Instagram. Featuring Mini Mathur, Malaika Arora, Nikhil Chinapa, Kunal Vijjayakar, Cyrus Sahukar, Shenaz Treasury and Preeta Sukhtankar, the album screams goals from miles away. We can also spot a “guest from the competitive channel” Gaurav Kapur (more on that later). Maria Goretti, former MTV VJ (now a chef), also penned a heartwarming note for her “loud crazy bunch.” She said: “I love this loud, crazy bunch that I’ve worked and traveled with for years… When you love what you do and you work with people whose atmosphere you like, it doesn’t feel like work except ( cable visits). We laughed, cursed, cried, worked like crazy and had the time of our lives at MTV India. And every once in a while we find a way to meet up and talk about those crazy times and laugh some more.”

Maria Goretti wrote this for Gaurav Kapur. “And of course the crazy VJ from the competition channel [V] mustn’t mention ha ha ha Gaurav Kapur.” For those who don’t know, Gaurav Kapur started his career as a VJ on Channel V.

Maria Goretti concluded her note with a Miss You note for Amrita Arora and Cyrus Broacha. In response to the post, Amrita Arora said, “My roommate, I love you.” To which Maria Goretti responded, “You must come to the next Anu [Amrita Arora], my home in December.” Mallika Dua spoke for all of us as she wrote, “This is so heartwarming. The best days of our childhoods.” Actress Mukti Mohan wrote, “The MTV OGs are here. Wooohooo.”

Mini Mathur also shared a video of the “crazy afternoon.” As a side note, she said: “The coolest job a TV presenter could ever ask for in India – to be a turn-of-the-century MTV VJ. The OG Veejays reunited today after years, although most of us have remained friends for life. And we realized… Nothing changes when you’ve always been the best. Thank you for bringing us together for a crazy afternoon. And since we always finished every show on MTV … Have fun.” Mini Mathur also insisted on doing a funny dig at Gaurav Kapur. “PS: We had a guest VJ from the competing channel [V] because we all love Gaurav Kapur, don’t we?” Yes, we all do.

So what do you think of this reunion?