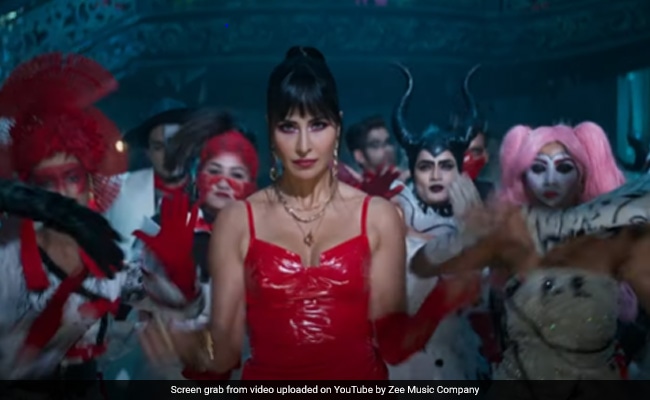 A still image of Kinna Sonna teasers (courtesy of ZeeMusicCompany)

Hey guys, are you ready for a new dance anthem? Because Katrina Kaif is ready to get you grooving to the first song of her upcoming movie phone bhoot It’s an upbeat track and you’ll definitely love it. Katrina, who appears as a ghost in the Gurmmeet Singh direction, looks most stylish in the titled song Kinna Sonna. The actress looks chic in a blood red outfit. She is joined by Ishaan Khatter and Siddhant Chaturvedi, who play the roles of ghostbusters in the film. The full song will be released on Thursday. Katrina shared a little glimpse of the dance number on social media, writing: “Kinna Sonna. Our first song will be out tomorrow at 12pm” with a few dancing icons.

Siddhant Chaturvedi’s caption for the song teaser read, “Get ready to groove Kinna Sonna. Song off at 12 tomorrow.” Kinna Sonna was composed by Tanishk Bagchi and sung by Zahrah S Khan and Tanishk.

phone bhoot Directed by Gurmmeet Singh. The film is being produced by Farhan Akhtar and Ritesh Sidhwanis Banner Excel Entertainment.

The follower of phone bhoot was published on Monday. It promises lots of fun, drama and thrill moments. If you haven’t seen the trailer yet, watch it now:

Katrina Kaif was a sight to behold at the trailer launch event of phone bhoot The actress nailed the boss look in a dark floral pantsuit. Let us know how much you liked her outfit in the comments.

Ishaan Khatter, on the other hand, has Raja Krishna Menons pippa lined up. Soni Razdan, Mrunal Thakur and Priyanshu Painyuli are part of the film.