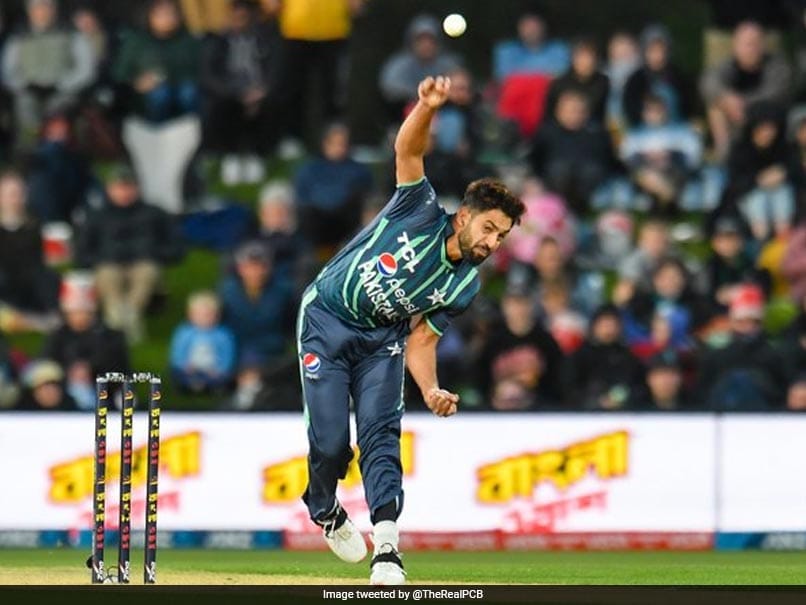 A total of five runs came from the over, in which Haris Rauf picked three wickets.© Twitter

Pakistan defeated New Zealand by 6 wickets in a Tri-Series T20I match between the teams at Hagley Oval, Christchurch on Saturday. First up, Kane Williamson beat led New Zealand with 147 for 8 in 20 overs before Babar Azam’s 79 didn’t fail and helped Pakistan go home with 10 balls. While Babar shone for Pakistan in the second innings of the game, it was the side’s pacer ace Haris Rauf who took the spotlight in the first innings with numbers of 3 or 28 in 4 overs.

All three of Rauf’s wickets came in his last over, which was the 19th over of the New Zealand innings.

New Zealand, who were 137-4 at the start of the 19th over, were looking to accelerate in the slog overs but Rauf’s three wickets hampered their scoring rate as they ended up only being able to score 10 runs from the remaining 12 balls.

Rauf first cleared James Neesham with the second ball of his over before taking new batsman Michael Bracewell’s wicket off the next delivery. The right-arm Pacer missed his hat-trick when Ish Sodhi stole a single from the fourth ball of his over, but he chose Mark Chapman’s wicket to end the over with a high.

A total of five runs came from the over, in which Rauf selected three wickets.

Death over bowling at its finest!

Which of Haris Rauf’s 3 wickets in an over did you like best?

Alongside Haris Rauf, Mohammad Wasim Jr. also recorded impressive numbers of 2 for 20 in his four overs. Mohammad Nawaz also took two wickets but conceded at a rate of 11 runs per over.